The Patrol Division is the largest division within the Department.  It consists of well-trained officers whose duty it is to patrol the Township of Spring and enforce the law.  The Patrol Division is the most visible section within the police force. The Patrol Division consists of five platoons that operate on a 12-hour schedule, providing the township with 24-hour police coverage 7 days a week.  The shifts run from 7am and 7pm and 7 pm to 7 am, while the split shift runs from 3pm and 3am.  Each officer is assigned to a specific district within the township in order to provide adequate police coverage for our residents.

Each platoon is supervised by a Patrol Sergeant and is primarily responsible for handling a wide variety of calls, including medical emergencies, domestic situations, helping stranding motorists, burglaries, traffic enforcement, or any other requests for service.  They maintain a strong presence within the community and receive regular training to further their skills and stay current with any new policing techniques, crime trends, and new technology.

The Criminal Investigation Division (C.I.D.) of the Spring Township Police Department is primarily responsible for the investigation of matters that cannot be easily resolved by a patrol officer within the shift the officer is working at the time the crime is reported.  The C.I.D. consists of a detective sergeant and four detectives.

Each detective has been cross designated as a Berks County Detective by District Attorney John Adams.  This enables the detectives to work on cases that may go across the Township’s boundary into other municipalities within Berks County.  In addition, each member is part of the County’s major crimes task force and can assist either County Detectives or another municipal agency’s detectives with investigations.

The Department has seen a rise in the number of complaints about drug dealing and drug use within the Township.  As a result one of the detectives has been assigned to primarily work on narcotic type investigations.  This detective works closely with other law enforcement agencies on the local, state, and federal level in an effort to reduce this type of activity and crimes that occur as a result of it.

One of the functions the patrol division is responsible for is working to keep the roads as safe as possible.  This task is accomplished through education, data information analysis, and enforcement of the traffic related laws.

Among the tools and equipment utilized are three Speed Monitoring Radar Trailers and three All Traffic Solutions Speed Signs, and one Kustom Signals Stealth Stat device.  The trailers can be brought to neighborhoods, school zones, construction zones and other locations to help promote compliance with the speed limit. The trailers are an unmanned portable, self-contained speed display unit that is towed to the desired location. Once deployed, it displays speeds of oncoming vehicles on a highly visible LED display. A speed limit sign mounted on the unit reminds drivers of the speed limit. This unit also has the capability to record the speed data for future traffic problem analysis. The trailer gives drivers the opportunity to see how fast they are actually going and slow down, without receiving a citation.  The All Traffic Solutions Signs work in a similar manner, except they are mounted devices that can be affixed to speed limit signs, utility poles, or other traffic sign posts.  The two larger signs have the capability of displaying the speeds of oncoming vehicles and providing them with a flashing warning light if they are traveling in excess of the speed limit.  They also have the capability to display a message, such as "slow down" or "thank you".

Additionally, the Department has invested in a Kustom Signals “Stealth Stat”. This small computer can be unobtrusively mounted on a pole to gather data on the frequency of traffic and speeds on any given road.

From the resulting report, officers can obtain details of the lowest and highest speeds that occurred during this time period, identify the average speed, and determine whether or not there is a higher preponderance of motorists traveling above the posted speed limit on any given street. This will allow them to identify the difference between actual and perceived speeding problems, and to focus their prevention efforts where they are most needed.

The signs can be placed curbside as a reminder to motorists to check their speed and comply with the speed limit.

All vehicles that are parked on the streets within the Township must comply with the Pennsylvania Vehicle Code.  Specifically, Section 3712, regulates that all vehicles parked upon the roads must have a current inspection; a current registration; and, must be in a drivable condition. 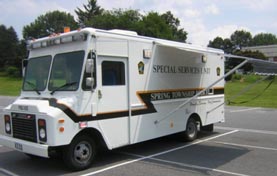 After four years in service, the Police Department out-grew the van and was in need of a larger truck that was capable of carrying a greater amount of equipment and supplying more power and lighting.

In 2010, the Police Department placed a “new” truck in service in order to respond to large-scale incidents.  The twenty-year old truck initially was owned by the Lincoln Park Fire Company.  It was then transferred to the Township of Spring Volunteer Fire Department with the merger of equipment.  When the Fire Department further consolidated equipment, the truck was placed for sale. The Police Department, and Township officials, saw this as an opportunity to continue to use its equipment to the fullest extent. 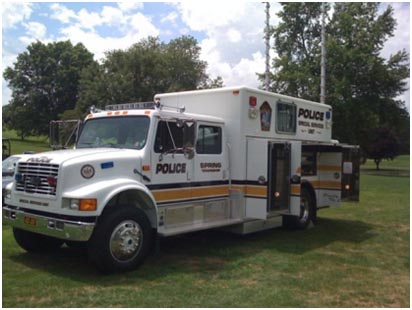